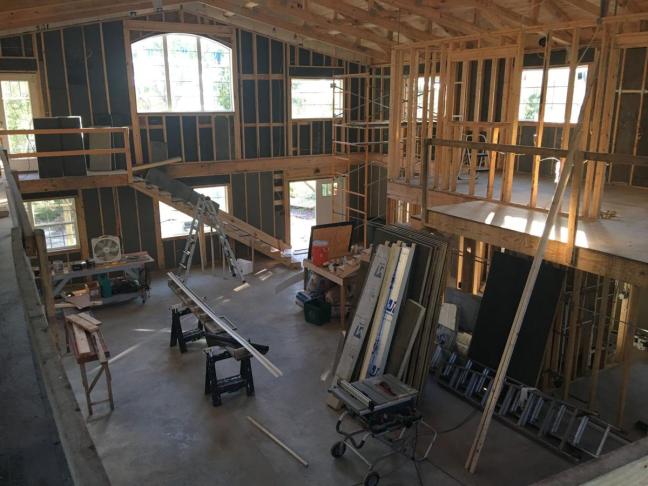 Please Note: A pdf version of the published article is available at the bottom of this post.

Coming across the new Gallant’s Channel bridge connecting Radio Island to Beaufort, a small white trailer is visible in the distance to the left just
beyond some sailboats and a parking lot. It would be easy to assume that the trailer is some forgotten piece of the past, perhaps something that someone hasn’t gotten around to hauling away, but that couldn’t be farthest from the truth. This unassuming little trailer is currently housing NC Maritime Museum Curator of Natural Sciences and marine mammal
researcher/conservationist Keith Rittmaster’s workspace along with thousands of bones, artifacts, photos and memorabilia. Rittmaster
has been heavily and passionately involved in the study and conservation of dolphins and whales (properly termed “cetaceans”) along the North Carolina coast for over three decades.

Stepping inside the small space it seems as if there could be no way several whale and dolphin skeletons could possibly fit inside, but they are indeed. Granted, not many are currently put together. Instead, they are safely stored along with dozens of binders full of photos of dorsal fins, jars of whale oil, drawers full of teeth and just about any other cetacean-related thing one could imagine.

With the need for space being quite evident and Rittmaster’s passionate spirit for marine mammal research and conservation, the dream of a designated space – a Bonehenge – has slowly become a reality. Located off a side road at the base of the Gallant’s Channel Bridge, the Bonehenge Whale Center is currently under construction on a piece of land adjacent to property owned by the NC Maritime Museum. The space was purchased by the charitable nonprofit Carolina Cay Maritime Foundation for $33,000. Why not purchase the property through the museum? According to Rittmaster, that answer is simple – time. As many have experienced firsthand, going through government channels can unfortunately involve a fair share of red tape.

As it would seem, Rittmaster isn’t the only person in Beaufort and the surrounding area who sees the need for a greater focus on marine mammal research and conservation. Of the $300,000 fundraising goal Bonehenge has set to complete the building as designed, the halfway mark was surpassed by the first week of July 2018 after only nine months of fundraising. Though it is impossible to set a completion date, if donations continue to come in at the current rate, Bonehenge could be open for its first guests by spring or summer of 2019.

The plan is for a large two-story open area in the middle of the building with offices, labs and galleries surrounding the perimeter downstairs and along certain parts of the upstairs galley area. Downstairs, there will be a lab for student and volunteer work that will be accessible from outside, as well as a volunteer desk and a room to keep the scissor lift which will be used to suspend, adjust and maintain skeletons from the roof trusses. Rittmaster’s office will be upstairs, along with a photo gallery and a small deck to allow for the drying of specimens.

The first featured exhibit of Bonehenge is intended to be the skeletal rearticulation of a 37-foot female humpback whale named Pitfall. In 2001, at the age of 3, she was hit by a large ship and washed ashore in Duxbury
Beach, Mass. When Rittmaster was offered her remains, he eagerly said “yes” despite not having anywhere to display them at the time. Once assembled, Pitfall will hang in the middle of Bonehenge’s ceiling providing
some excellent selfie opportunities.

Everything else will be determined along the way, including hours of operation for the site. Ultimately, the scientist envisions an engaging place for research, teaching and learning.

He would also like to see an interface between the Maritime Museum and Bonehenge property, so much so that visitors don’t know that they are separate entities. Though unsure how this will ultimately be accomplished, Rittmaster thinks some landscaping, a gazebo and outdoor activities and displays would do the trick and encourage visitors to explore exhibits at both properties.

“It’s going to invent itself,” he said. “What I love is hearing people say ‘Oh Wow!’ It just energizes me. That’s what I want people to do in there.”

The desire to see a seamless connection between Bonehenge
and the museum property is a feeling that is shared by the director
of the NC Maritime Museums, Joe Schwarzer. “The Bonehenge Whale Center currently being built by the Carolina Cay Maritime Foundation on property adjacent to the NC Maritime Museum’s Gallants Channel site is an outstanding project,” Schwarzer said. “Nelson Owens and foundation volunteers have done a remarkable job in developing and advancing this enterprise and everyone involved is to be commended.

“Currently, the museum is working with the foundation in hopes of developing an agreement that will allow Keith Rittmaster and his team to relocate to the center and continue and expand their nationally recognized research on marine mammals. This would be of enormous benefit to the program and of significant benefit to the museum and the community. The prospect of completing the center and having it available for ongoing research and educational programs for the public is most exciting.”

The overwhelming response Bonehenge fundraising has received from the community indicates both a great need and a growing interest in the creatures who allow us to enjoy and live off their maritime habitat day after day.

According to Rittmaster, 34 different types of cetaceans have been observed along the North Carolina coast, more than any other state.

Dolphin watching – and yes, they are dolphins (typically bottlenose) not porpoises – may evoke pleasant images of walking along the beach at sunset and capturing a brief moment of nature’s beauty. But unfortunately for those dedicated to research and conservation, that is often not the image seen. Rittmaster and wife Vicky Thayer have dedicated decades of their lives to the Marine Mammal Stranding Network. They respond to reports of
dead, dying and entangled whales and dolphins to learn about the lives and deaths of the animals. Sadly, the cause, when able to be determined (which is only about one third of the time), is usually human-related and, more often than not, entanglement.

One of the skulls in that small white trailer belongs to a juvenile dolphin named Lionel. Once a necropsy (an autopsy on a nonhuman) was performed, it was apparent that Lionel had become entangled in monofilament, which is used for standard fishing line. Unable to free himself, he remained tangled as he grew and eventually his bones grew around the line. Ultimately, he starved to death, unable to open his mouth. While often difficult to hear, these stories give a face and a name to conservation and encourage everyone to be more aware of what they and others are doing in coastal waters.

Seeing entanglement become an increasingly common cause of death for dolphins, Rittmaster and Thayer began the Monofilament Recovery and Recycling Program which provides an easy way for fishermen and beach combers to dispose of broken or unwanted fishing line. There are 42 recycling stations throughout coastal North Carolina and 12 in Carteret County along beaches and popular fishing areas. Since the advent of the program, Rittmaster and his volunteers have gathered thousands of miles of monofilament.

One of the longest-running studies Rittmaster has been involved with is the Dolphin Photo ID Project. He and his volunteers and peers (about 12 along the coast from Florida to New Jersey) regularly go out on boats in the ocean and estuaries in an attempt to find dolphins and photograph their dorsal fins.

Loads of information can be gathered from the pattern of notches along the dorsal fin. Not only can the dolphin be identified year after year (like tagging would allow), but it also allows researchers to monitor how the animals behave and evolve over time. They can document which dolphins appear in summer versus winter, who they associate with, how often they give birth, where they give birth. The photo ID project even aids in preservation through the monitoring of injured, diseased and entangled dolphins.

Rittmaster is quick to note that much of his research in done in partnership with other agencies, which he considers to be of the utmost importance in marine mammal research and conservation. Institutions such as UNC-Wilmington, Outer Banks Center for Wildlife Education, the National Park Service, Nags Head Dolphin Watch, the Outer Banks Center for Dolphin Research, Duke Marine Lab, NOAA and NC State CMAST all work together to further the common cause. Whether it’s assisting each other with fundraising, writing papers/articles or borrowing artifacts, members of these organizations can always count on their colleagues.

There are many paths that Rittmaster could have taken throughout his career, but there is an evident passion for conservation, a genuine drive to learn more about the animals he is researching and an obvious interest in passing that knowledge on to future generations. When completed, the Bonehenge Whale Center will indeed be a center for science, although arguably its walls will also be filled with the same humanitarian spirit that has guided Rittmaster as he brought this impossible dream to life.