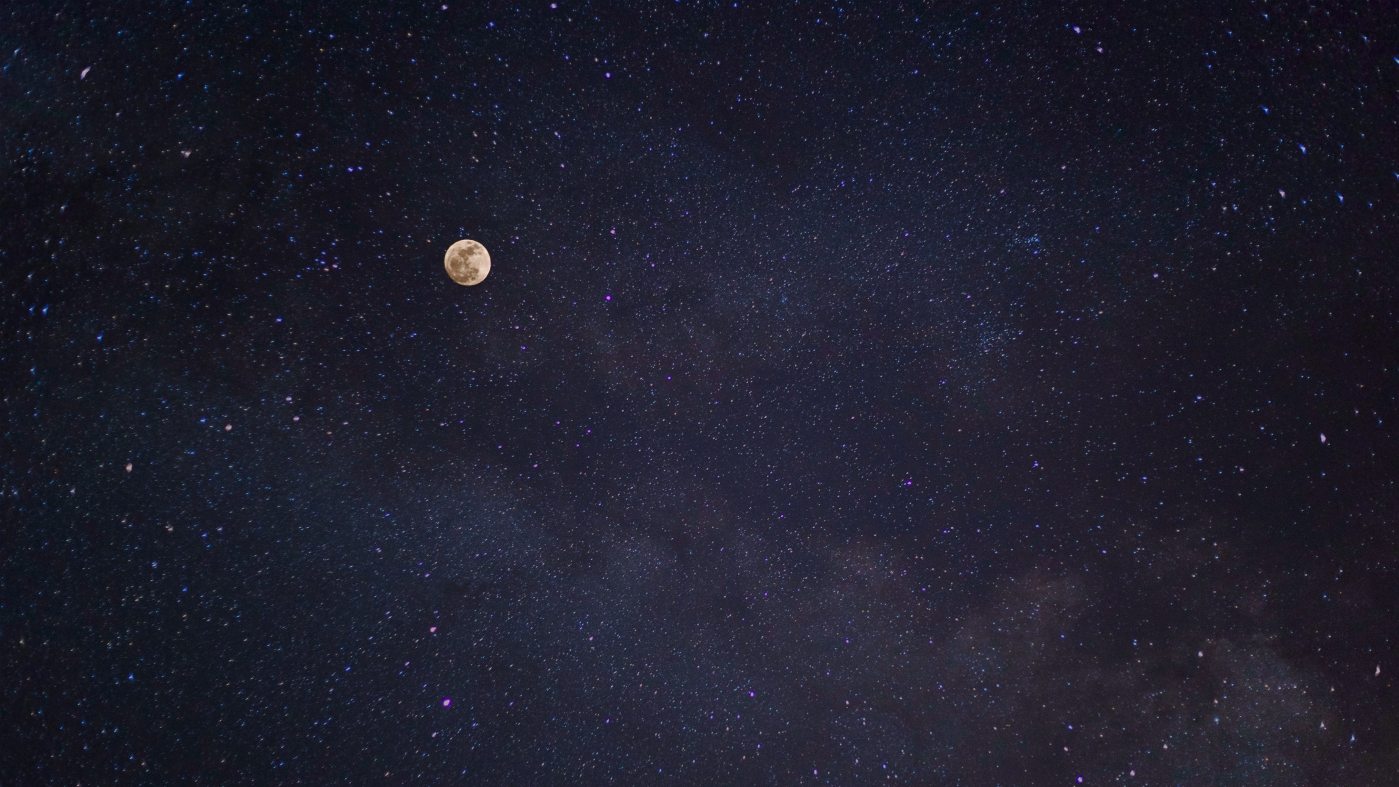 On the first Wednesday of each month, an

unmistakably rare group of people can be found

meeting on the second floor of the Webb Library

in downtown Morehead City. Budgets and

minute-taking aren’t the primary focus at this

gathering, but rather the search for knowledge about outer space

– stars, the moon and the millions upon millions of other objects

The Crystal Coast Stargazers astronomy club formed in the

fall of 2016. Though the formal club is still rather young, many

of its astronomy-enthusiasts and have been participating in various

The group came together when founding member David Heflin

Beach, about getting some fellow astronomy enthusiasts together

didn’t think there would be enough interest to start a club, but

Angeli, Carol Reigle and Doug Waters and the Crystal Coast

which directly led to their interest in outer space. Member Brandon

Porter has had an interest in astronomy since childhood. Growing

up before the internet was the go-to source for everything, he

relied on picture books and the occasional television program. His

first telescope sparked an interest that never left him though and

now, as an adult, he is an avid amateur astronomer who is thrilled

to see that same interest in his own daughter.

with space exploration during the Race to the Moon of the 1960s.

goner and have been hooked ever since,” she said. “There’s nothing

they look through the scope. It takes me back to that moment in

relive that excitement over and over.”

members with a core group of about 15 that attend most meetings,

viewings and other events. They do, however, have about 100

meetings regularly so the club is steadily growing.

While the Wednesday meetings get routine club business out of

the way, the true magic happens when the group makes the trek out

to their viewing location in Otway. The Stargazer’s site is located

at the North River Wetlands Reserve which is owned by the N.C.

The gravel road leading in to the North River observation site

is lined with tall grass on either side and, to the chagrin of many,

filled with the bird-sized mosquitoes that one would expect to

find in any undeveloped area Down East. At one point some of the

if the current one becomes too obstructed.

According to Pelletier-Harman, the loudest sound you hear

astronomy seriously, they ultimately are folks who not only enjoy a

common interest but each other’s company as well.

promoting the preservation of the night sky through outreach,

education and the encouragement of lessening light pollution.

as a Dark Sky Site, it could easily qualify as one if an application

were submitted to the IDA.

Staunton River State Park in southern Virginia, only about 40

miles north of the North Carolina border or approximately 100

miles north of Raleigh. There is also an officially recognized site

in North Carolina at the Blue Ridge Observatory and Star Park, 6

miles west of Spruce Pine and about 30 minutes south of Boone.

Eligibility requirements differ depending on what kind of space

can be viewed from the site, including International Dark Sky

They not only have light pollution-related requirements (based

sky” an area will have), but also have land access requirements

sky, if it is publicly or privately owned, an historic site or a nature

that are officially designated as International Dark Sky Sites

Dark Sky status is determined by the Bortle Scale which ranges

visible with the naked eye. On a clear night with proper conditions,

the aid of a telescope.

Though this growing group of gazers has done an excellent

job of organizing events and community outreach programs, they

have some outside resources at their disposal which they readily

take advantage of. One of the most prominent is the Night Sky

Network (NSN), a crew of amateur astronomy clubs that is

supported by NASA. NSN provides an excellent way for club

members to maintain contact with each other via message boards

and emails and also provides a wealth of resources for amateur

clubs all over the world.

Members of the Night Sky Network have access to NASA

to network with one another. NSN even provides complimentary

toolkits for clubs to use at later events. When the tools are put into

service, the event can be classified as a Night Sky Network event, a

For Pelletier-Harman, the toolkits are an invaluable resource.

They make sharing what can be very complex information a

more relatable and hands-on experience for those who attend her

programs. Children who attend are especially fond of the toolkits

as they allow them to learn by touching and doing, not just listening

to a lecture or watching a presentation.

In addition to monthly meetings and the viewings in North

River, the club assists with Astronomy Nights at the Fort Macon

Harman participates in part of the program that takes place the

second Saturday of every month.

some interactive material to keep her audience engaged. These

to upwards of 150 in the peak summer season. Guests vary from

homeschoolers and year-round students to tourists and people

from surrounding areas visiting for the day. Pelletier-Harman has

to attend the program and turn around and drive back home.

A similar program is held at the Cape Lookout Visitors Center

on Harkers Island that typically sees a smaller turnout (around 30)

and is only held during the summer months.

During both events, time is set aside to (weather permitting)

allow attendees to look through telescopes that have been provided.

club members questions or seek out advice on their telescopes or

Pelletier-Harman carries the designation of being Eastern

she represents NASA and acts as envoy between NASA and the

public and shares information about its programs and missions.

Her focus is on upcoming missions, activity on earth (weather,

climate change, etc.) and educating those with an interest on what

is going on in the world around them.

“The application process and training were very intense,” she

said. “I was honored to be chosen from applicants around the

globe to represent NASA and our club. There is a definite need in

information I am thrilled to go out and work with the public. It’s

adventures I will be able to share in the coming years.”

According to group members, the best time to go out for a

of the moon when it isn’t visible). The group tries to schedule their

events the Friday closest to the new moon.

The invisibility of the moon creates less light pollution and

thus more ideal conditions for viewing stars and other celestial

bodies. Unfortunately, one can do all the planning and moon phase

tracking they please, but this is the kind of hobby that is 100% at

the mercy of the weather. A perfect new moon phase is no match

for clouds and thunderstorms.

The Stargazers have found, however, that viewing is much

easier in the winter. The skies are clearer overall because of the

the sky changes throughout the calendar year. It determines what

you’re looking for (or what is viewable) and where to find it. The

planets move at different speeds, so people may be able to see

different ones at varying times of the month, but they’re not in the

same position in the sky for too long.

The best time to view planets, according to club members, is

when they are in opposition – that is, when the planet is lined up

with the earth and the sun, making it appear much brighter and

easier to see. The time when each planet is in opposition changes

Start with the basics. Learn the location of the North Star and

the constellations, said the experts, and learn how to use a star map,

binoculars and other equipment including telescope basics.

“The most important tip for beginners would be to find your

do night sky photography and have captured amazing images of

the celestial bodies that surround us. Starting off, a digital camera

beautiful images of the stars, Milky Way, moon and other objects

that are relatively close in space.

Once comfortable with the camera, one may decide to move

on to the next level – astrophotography. This involves attaching

the camera to a telescope, making it possible to photograph things

The Crystal Coast Stargazers are busy planning for the

upcoming Observe the Moon night as well as the 50th anniversary

Observe the Moon is an annual event held each October to

raise interest in astronomy. Events will be held across the country.

Although the club isn’t yet sure where they’ll setup this year, the

programs typically involves setting up telescopes so those interested

can stop in and get a closeup look at the moon.

For the 50th anniversary of the moon landing, the local club

heavens. With the advent of the Apollo program, Hubble, the Mars

Rover and countless other space missions and unmanned crafts

sent out, so much information has been collected over the past 50

years. However, one must also keep in mind that any knowledge

currently possessed about the universe surrounding us initially

began with a seed of curiosity and a drive to find out the answer.

That drive to find out more, to answer those countless “what

ifs” is nowhere more apparent than in the Crystal Coast Stargazers.

with others and take beginners under their wing. Could the next

the first Wednesday of every month? Just as most things with space

exploration go, the possibilities are limitless.